What Is a Geomancer? 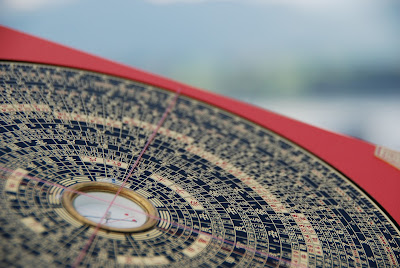 In the fantasy world, Chinese geomancers may be the closest equivalent to wizards such as Gandalf (from Lord of the Rings) or Albus Dumbledore (Harry Potter).

An image of the geomancer from Chinese pop culture is that of a man dressed in long robes and armed with a wooden sword. See, for example, geomancers fighting the undead—or “jiangshi”—in the Hong Kong Mr. Vampire movies from the 80s. They immobilize the jiangshi by pinning paper talismans to the corpses' foreheads.

So what exactly is a Chinese geomancer? It’s basically a person skilled in the ancient art of feng shui. It helps if you first know what feng shui is.

Feng shui literally means “wind, water” in Chinese. The phrase reportedly originates from The Book of Burial written by a Taoist mystic named Guo Pu (AD 276 – 324). Feng shui principles, though, are believed to have been practiced in China for more than 4,000 years. 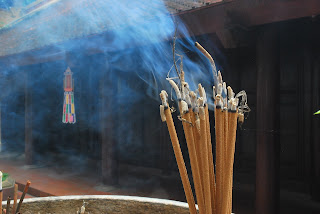 Feng shui has its roots in Taoism, which is a Chinese philosophy and religion that emphasizes living in harmony with “the path,” that is, the natural order. The Taoists believe there is a vital force (“qi”) within every object, whether animate or inanimate. Feng shui is the practice of ensuring humans are in harmony and balance with the natural energies of their environments. It seeks to improve the flow of positive qi while keeping negative energy at bay.

The Taoists also revere their ancestors. They believe that the dead look after their descendants and can influence their luck and fortunes. That explains why many Chinese people place such importance on the siting of their forefathers’ tombs and grave sites. If you keep the dead content, they’re more likely to bless you with prosperity.

Geomancers historically were hired to find auspicious sites for tombs, important buildings or homes. A suitable site depends on factors such as topography, geographical features (hills and bodies of water), the stars, or calculations using the feng shui compass.

Feng shui has further evolved to become an interior decorating tool. Feng shui practitioners are hired to arrange furniture so as to enhance beneficial qi. They do this through balancing the five feng shui elements—wood, metal, fire, earth and water—inside the home or office. 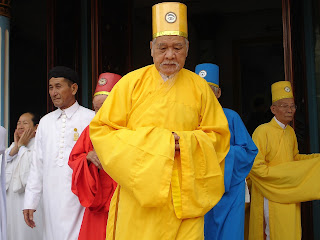 The luopan, also known as a feng shui or geomancer’s compass, is a directional compass that geomancers use to determine the precise orientation of a building or object. The formulas embedded in the tool’s surface are used by geomancers to analyze the specific energy associated with each direction. Unlike ordinary compasses, the luopan’s needle points to Earth’s south magnetic pole instead of the north.

The octagonal bagua helps a geomancer to map out energy areas in an office or dwelling. A bagua mirror, on the other hand, is an octagonal protective amulet that deflects “sha qi,” i.e. “murderous” energy. You place the mirror facing the object or geographical feature in question.

In feng shui, swords are symbols of protection that should be displayed in the home or office to induce good qi. There are many types of swords, the most popular of which are swords made of peach wood and the coin sword. The two are considered powerful talismans against evil spirits, bad influences and malignant diseases.

In Chinese pop culture, the geomancer uses the peach wood sword as a weapon against demons and revived corpses.

The Chinese almanac is a timekeeping system based on both the lunar and solar cycles. It shows the important Chinese festivals. The book also helps geomancers to find the luckiest dates and times for important personal and business undertakings such as renovations and weddings. 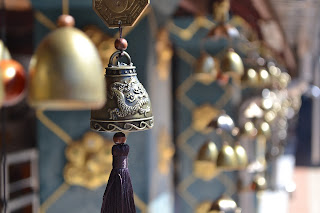 These talismans, or “fu,” are pieces of yellow rice paper on which magic symbols or characters are printed in red ink. The talismans are believed to contain magic spells or good qi. These amulets can be used to protect a dwelling, heal the sick, or exorcise evil spirits.

You activate the magic

A geomancer rings a bell to unblock stagnant energy. In feng shui, bells also are hung in homes as decoration. Their peals promote good energy and attract luck and prosperity.

(The photos are from Pixabay.com.)