When it came to writing The Corpse Ritual, it was a no-brainer to set the book in a museum.

For one, I’d already decided the book would feature mummies and jiangshi. I also love museums, especially natural history museums. In addition, you can’t set a series in Washington, D.C., without mentioning its museums. After all, D.C. is known for its museums.

The district’s National Air and Space Museum and National Museum of Natural History are two of the most visited museums in the United States. Both museums are part of the Smithsonian Institution, which was created by an act of Congress in 1846 to be “an establishment for the increase and diffusion of knowledge.”

The Smithsonian has since become the largest complex of museums and education centers in the world.

I’ve long thought of natural history museums as a great setting for urban fantasy stories. Many of their exhibits relate to magic, ritual and superstition. One good example of this is the British Museum’s ancient Egypt collection. If you’re ever in London, I recommend seeing it. The British Museum has the largest collection of ancient Egyptian artifacts outside of Egypt.

Natural history museums are creepy places, which is another reason why they make a great setting. If you don’t believe me, try visiting a large natural history museum by yourself at a time when few other people are around. There is something about wandering alone in dimly lit rooms and hallways filled with long-dead animals and/or humanity’s relics and memories that makes you contemplate your own mortality. 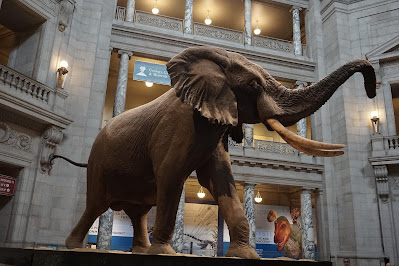 My favorite museums are the British Museum and New York City’s American Museum of Natural History. However, the Smithsonian’s Natural History Museum holds a special place in my heart. It is my local museum. I’ve visited it many times with my family. I’m very fond of Henry, the massive stuffed elephant that has pride of place in the museum’s rotunda.

You may be surprised to learn that my favorite exhibit in the museum is not “Eternal Life in Ancient Egypt.” No, it’s actually the Butterfly Pavilion. I love seeing the butterflies flying free in the pavilion. An even better treat is having one land on you.